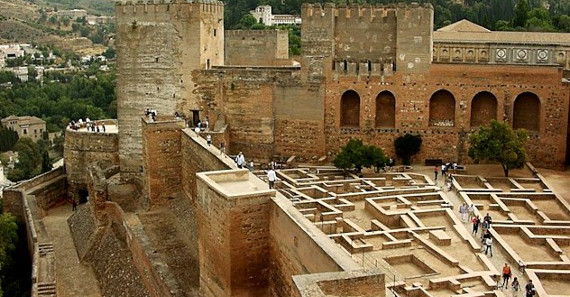 Granada was first settled by native tribes in the prehistoric period, and was known as Ilbyr. When the Romans colonised southern Spain, they built their own city here and called it Illibris. The Arabs, invading the peninsula in the 8th century, gave it its current name of Granada. It was the last Muslim city to fall to the Christians in 1492, at the hands of Queen Isabel of Castile and her husband Ferdinand of Aragon. The name Granada is ancient and mysterious. It may mean "great castle", for the Roman fortress which once stood on the Albaicin Hill. When the Moors came here, the town was largely inhabited by Jews, for which they called it Garnat-al-Yahud - Granada of the Jews. The Jews are said to have been one of the first peoples to settle in Spain, even before the Romans.

The name Granada is ancient and mysterious. It may mean "great castle", for the Roman fortress which once stood on the Albaicin Hill.

Granada is located just at the point where the Sierra Nevada mountains meet the fertile plain of the vega. Behind it are steep mountains and in front there is flat agricultural land. I suppose it was first inhabited and grew because it was easy to defend from behind and although it is dry in the summer there is always a supply of water coming from the mountain fuelled by melting snow, the rich soil in the Vega provided an ample food source. The altitude is 630 metres. More than 320 sunny days each year and an average annual temperature of 20º Celsius turn Granada's Tropical Coast into a heavenly enclave. Light winds from North Africa, warm waters from the Mediterranean Sea and shelter provided by the nearby peaks of the Sierra Nevada give the Tropical Coast an Europe's unique subtropical microclimate.

For BOOK your ticket to the Alhambra

Join a group to visit the Alhambra and Generalife every day in the morning, for only €45 the regular guided tour includes: entrances + an Official Guides , members of AGIP (Local Association of Professional Guides).

Book an official private guide for you and/or a group of family, friends or partners, and to know in a more comfortable and more direct way the Alhambra.
As this is a private tour, you pay for the service itself not per person, so thirty people would pay like one.

The other Alhambra, "the illuminated one", is the one that you will be able to enjoy, if you hire this other visit modality where new sensations will be perceived.
As this is a private tour, you pay for the service itself not per person, so thirty people would pay like one.

Enjoy for only € 25, of a Gypsy Zambra in one of the Caves of the Sacromote, with a drink during the flamenco show and a walk for San Nicolás.