The Alhambra of Granada

The Comares Palace, at the Alhambra in Granada, is comprised of a group of rooms joined around the “Arrayanes” courtyard, with porticoed galleries on both ends. At the north end is the “Barca” hall and the “Embajadores” hall, which occupies the interior of the “Comares” tower, from where the “Darro” valley can be viewed. “Yusuf I” wanted to leave the visitors astonished with the decoration of his official residence. In order to achieve that, he ordered that the construction and the decoration had to be exquisite. Although, probably, he did not see these works finished, since several inscriptions name his son Mohamed V as the creator. The Comares Palace is the most important palace of the Alhambra. It was the official residence of the sultan and the place where the “throne” hall was located. It was built and richly decorated by “Yusuf I”, who was responsible for most of the existing constructions of the Alhambra. 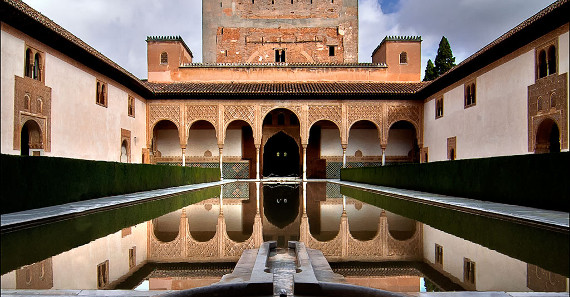 Court of the Myrtles

At the Gold courtyard, we find the access façade to this palace, of great beauty and constructed by “Mohamed V”, son of “Yusuf I”. At this façade there are two openings: the right opening gives access to the family rooms and the left opening (through which the visit continues) gives way to the official area. The decoration on this façade is very rich, with ceramic socles and plasterworks, standing out the magnificent wooden eave. Continuing the visit, we get to the “Arrayanes” courtyard, also known as the “ Alberca” or the “Comares” courtyard. It is a classic courtyard in a Arab-Andalusia style, with two porticoes on its smallest sides, a large “a-birka” (pond), where the constructions are reflected, surrounded by solid “arrayán” hedges (myrtle), and two marble basins that pour the water in the pond. The porticoes have seven semicircular arches, being the central one the biggest, with plaster pierced panels. Over the south porticoe are two floors, one with seven wooden lattice windows, being the central one double, and the upper floor has a gallery over the courtyard. The rooms at the south porticoe, got destroyed when the Carlos V Palace, which is joined to this construction, was built. On the north side there is the biggest hall of all the Alhambra; the “Embajadores” Hall, the throne hall. This hall is located inside the “Comares” Tower, which is 45 meters high and is the biggest of the whole fortress. To get to it, after going through the porticoe, we find, first of all, the “Barca” hall, which has a beautiful wooden ceiling (replica of the original ceiling which was destroyed in a fire in the 19th century). Behind the door that opens on the left of this hall, is the latrine of the palace, which can not be visited. Going out of the “Barca” hall, at the space between this hall and the “Embajadores” hall, we can see, to the right, a small oratory, probably reserved for the sultan. Finally we get to the “Embajadores” hall, shrouded in a relaxing darkness. It is illuminated only with the light that comes in through the big windows. There are three windows on each wall. At the central one, in front of the door, was where the throne was placed, and it is most richly decorated. Higher up, a series of small pierced windows illuminate the beautiful wooden ceiling, on which the seven heavens of the Islamic cosmos are represented, which the soul of the believer must travel until it meets Allah. Again at the courtyard, we will continue the visit through a room on the west side, which communicates with the Lion’s Palace. This entrance is modern, since in old times these two palaces were not directly connected.

Book your tickets online for The Alhambra!